Last February, 23th we made a new thematic route in Cordoba with our Friends of  Archeology and people  interested in Cordoba’s heritage, but this time focused on archaeological remains of the leisure buildings in roman times that we still conserve in the city.

Our visit starts in the Principalship, in the University of Córdoba, visiting the visible remains of the ancient amphitheater of he Colonia Patricia, one of the biggest  of the Roman Empire. After that, we visited the Roman road and the Monuments of Puerta Gallegos that currently, are opened: we continue towards the roman natatio remains  which is found in the Street Concepción (Bershka).

Finally, we visiting the Roman Temple, contemplating the view of the Roman Circus in Córdoba and we finished our visit in the Archeological Museum of Córdoba and the Roman Theather remains found in its bottom. 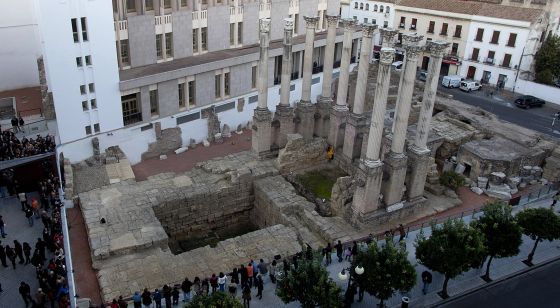