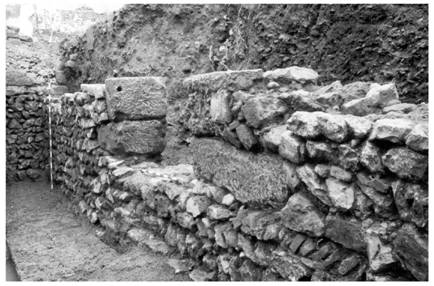 It seeks to shed light on one of the lesser known stages of the city’s history: Late Antiquity and High Middle Ages, eclipsed between the Roman past of the provincial capital and the time of Umayyad splendor.

The urban transition from the ancient to the medieval world is probably today one of the lines of research most debated by the international scientific community. Processes such as the contraction of cities from the last centuries of the empire, depopulation, abandonment of neighborhoods outside the walls, the founding of new necropolis or the reuse of existing ones, the development of Christianity or the concentration of population around Suburban basilicas and martyria, are well documented in some European and Hispanic cities. The importance of this panorama lies in observing if the archaeological evidence of the phenomena that occur in this period suggests the existence of common dynamics or, on the contrary, a strong local variability that allows us to speak of different progressions, arriving at establishing lines of general character in which the evolution/transformation of the city from Roman times will have special attention; The detection of processes and urban and architectural models capable of transmitting and disseminating ideologies; The establishment of changes or urban and social changes in topography; The Christianization of it; Or the influences of private initiatives.

Archaeological work has brought to light a multitude of data, whose interpretation allows us to confront the evolution of historical cities from diverse perspectives, such as the revision of some of the historiographic themes about the involution of urban core, their role as centers of political and religious power, or the primitive settlement of Islamic populations. The Cordovan case has not been distinguished from what has happened in the rest of Europe, although we must bear in mind that its role as paradigmatic capital of the ancient and medieval world gives it a special meaning. Thus, for example, the arrival of Islam will mark a true point of inflection, which will allow us to compare different processes with the rest of the Iberian Peninsula and to one end of the Mediterranean. It is for this reason that, within the framework of the deep mutations that have taken place in the urban image of Cordova, understood as a unique site, we must pay attention to questions concerning not only the public and intramural areas, but also to the funerary world, domestic architecture, orchards, landfills, industrial activities, etc. Our ultimate goal is to complete the studies on low-imperial, late-medieval and post-medieval topography, starting from the need to carry out a joint, comprehensive and unified study, within the framework of a diachronic reading.

The unique characteristics of the capital of Cordova make any research project focused on the study of its urban and suburban areas find itself with a dense, complex and unique archaeological heritage to face, making it a perfect “laboratory of experiences”. Until a few years ago, research lines focused on the phenomena of urban structure, the new configuration of the public space or the definition of different forms of habitat that took place between the 2nd Century AD and the High Middle Ages, had to be developed on sources extraordinarily limited, old or incomplete. That is why it is our fundamental objective to complete the initial studies, as a continuation of the projects we have been developing since the 1990s, centered on the recreation of the funerary space: from the Roman period, first and in its evolution until the reconquest Christian, later, and in the western suburbs of Cordova, with the Roman amphitheater as protagonist. Our final aim will be to complete the studies on topography in the lower-imperial, late-medieval and late-medieval Cordoba, starting from the need to carry out a joint, comprehensive and unified study, within the framework of a diachronic reading.

On the other hand, the latest aims of the new project include the training of competent professionals, rigorous research, scientific dissemination and the transfer of knowledge generated to society. Aspects all of which require daily work in classrooms and laboratories, direct involvement in urban planning and urban Archaeology management, which is managing to change the negative bias of Cordoba Archaeology – the maintenance of an accredited line of scientific publications, periodicals or not, and the design of actions (integration of sites, exhibitions, lecture cycles and/or divulgative character seminars, etc.) aimed at reverting in society a knowledge that is increasingly demanded and that the historic city is also an important economic asset and a quoted job site.

Purpose of the project

The city, understood as a living organism, undergoes continuous transformations throughout history, in such a way that its urban and suburban forms are, in fact, the reflection of the mechanisms of adaptation and response by the human communities before an environment in constant evolution. Thus, within what has been considered a true “boom” of the Archaeology of Late Antiquity, the urban changes of the Roman cities are configured as one of the favorite subjects and most conflictive of today’s medieval studies, both European as well as Spanish. This fact has been favored by the considerable increase of the archaeological activities in historical cities during the last decades, contributing to the substantial advance in the knowledge of these ancient cities; It is precisely this urban Archaeology that is allowing to observe, in those nuclei with a continuous chronological sequence, that there is an authentic evolution and transformation of its classical morphologies, both in its urban centers and in its territorium. However, these mechanisms of mutation, in which Christianity plays an important role as an ideological and material manifestation, are much more complex than might be expected; A situation that is complicated and enriched even more in the Hispanic case due to the conquest and Islamization of the peninsula after 711 AD. A problem derived from this situation is perceived, for example, in the treatment of available information: on the one hand, the ancient city, paying special attention to the so-called “Christianization of the urban landscape”; And, on the other hand, the Islamic city, which enjoys a high-quality scientific tradition, carries out topographical and architectural studies formulated from functional perspectives that hardly affect the historical evolution of Andalusian cities and their relation with previous urban realities.

In this evolution from the civitas to the madina we can not leave aside the existence of a discontinuity, which responds to the dissolution of an urban reality and to the formation or redefinition of a different one. Hence, we must raise the problem from a double dimension: on the one hand, theoretical reflection in the light of the historiographic debate that exists today, and on the other the analysis of some concrete examples of the suburban phenomenon in Spain and Europe; Only in this way will some of the topics on the involution of cities, their role as a center of political and religious power, and the parallelization of some problems related to the early settlement of Muslim populations be reviewed. Thus, the experience accumulated in some historic cities of the Western Roman Empire is configured as the necessary starting point for our reflection on what the urban model and its transformations should be from the Lower Empire period to the High Middle Ages.

All this will be reflected in the establishment of a series of questions and in an attempt to solve problems such as:

The specific objectives of this research project can be summarized as follows: