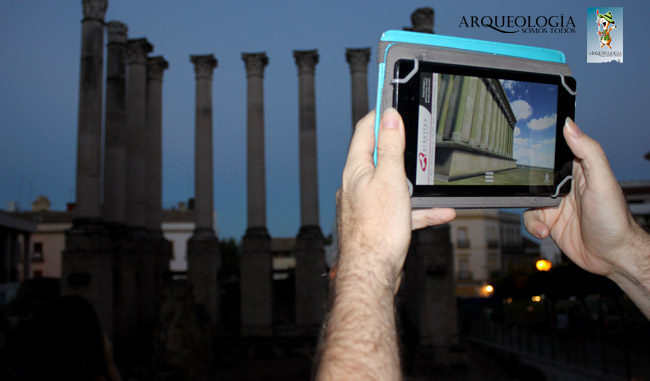 After the recent bursting of the real estate bubble, which caused a dry break in public and private construction and, hence, the management and urban archaeology associated with it, unemployment has increased in an alarming way in the sector today around 70% in Spain; An enormous volume of archaeological (material and historical) information has been lost, and a good part of the scarce monumental remains conserved in large urban sites like Cordova are degraded day by day in abandoned plots, basements and box-houses without forming any patrimonial discourse, lacking in meaning.

The economic recess we live in has therefore become a serious threat to the protection, conservation and sustainability of our archaeological heritage, but also in an opportunity (future) to reflect on the mistakes made, to make self-criticism and to reinvent ourselves, always aware of our responsibility to the environment. A complicated challenge, which needs innovative solutions based on research excellence and technological development; Consensus on synergies; Granting the citizen and business initiative, under the auspices of the Administration, a more relevant role; Investigate while spreading; Socialize, as well as monetize, the knowledge generated. It must be demonstrated that there are alternative, and very effective (or at least transverse) ways of addressing the past; That archaeology is a common legacy capable of enriching the patrimonial offer of our historical cities, of multiplying its attractions and its projection in the world, of becoming a socioeconomic engine in those that lack solid industrial fabric…

These were the philosophy and objectives that inspired our previous project: “RESCUE: From the Stratigraphic Register to the Knowledge Society: Archaeological Heritage as a Sustainable Development Agent (City and Territory)”, which will end in early 2016 with an international congress with the consensus and the concurrence of a very high number of outstanding researchers in their respective fields and countries, we will finally establish the theoretical bases of a research, management, conservation, dissemination and profitability model of the archaeological heritage in the historical city.

But after the theory has to come the practice; It is time to take action, through applied research and new technologies, to move from the simple transfer of knowledge to its conversion into useful tools for society, business and citizenship, which can be found in them elements of identity, enjoyment and culture, but also economic return, reinforcing in passing the role of the past as a source of knowledge and potential employment resource. In line with this, the PATTERN project proposes to convert the theoretical model into a practical model of scientific culture that allows an adequate, sustainable and strategic social return of the archaeological heritage (tourism, culture, education, business, identity), with ICTs and the digital world as a link between the different actors involved. This model will be tested initially on Cordoba and part of its province, a space that we know well, although we intend to design a general work pattern that can be related to other cities and territories with similar problems.

The situation of serious global economic crisis that we have lived for some years undoubtedly poses a serious threat to the protection, conservation and sustainability, both in the present and, above all, in the future, of the Spanish historical heritage in general and Archaeological in particular; One of our most defining signs of cultural identity. In this context of uncertainty and widespread changes, the Public Administrations, given the enormous wealth that our country has, are facing a serious management problem (understood in its broadest sense) that can hardly be faced without help. In order to overcome this complicated social challenge, it is necessary to propose innovative solutions – derived from scientific knowledge and technological development – and to agree on synergies in society as a whole, giving private and business initiative a more relevant role, but always under the control or guardianship of Public Administrations, as it has had to date.

Likewise, it is absolutely essential that the agents responsible for scientific research in the field of Archaeology, especially the universities and research groups, traditionally encrusted in the narrow academic margins and therefore far removed from reality and daily necessities of the rich archaeological legacy in our historic cities and in rural areas, innovate, promote and undertake actions that can contribute not only to the conservation and sustainability of the same in the short term but also, with a more distant and ambitious perspective, its conversion into a factor of economic and cultural dynamization that generates progress and social welfare.

Aware of all of the above, and mainly through the launching of the Arqueología Somos Todos Scientific Culture project, the Sísifo Research Group of the University of Córdoba has seen in the last years among its top priorities the dissemination of the Archaeological Heritage at all society levels, taking as a basis the results of its extensive scientific research, in order to bring it closer to it and to revert, at least partially, the funding obtained from different national R&D&I projects ; As well as to promote education and training in community values ​​and identities and to respond, in turn, to the growing social demand for cultural products; Including those related to the knowledge and enjoyment of the vestiges of the past (including also the most recent or close to us).

On the one hand, the project we are presenting is based on the important research and dissemination experience accumulated by the Sísifo Group for more than two decades in relation to the archaeological heritage of Cordova and its surroundings; But also of the results in management and dissemination of the City of Puente Genil (Cordova), represented in the Roman Villa of Fuente Álamo and the mosaics studied by the Institute of Culture and Technology of the Carlos III University of Madrid. A necessary overlap, represented in the city and the territory, to go further in the search for solutions to the changes and social innovations that we are experiencing at the moment.

Technological advances, especially those related to the forms of communication and the recreation of interactive environments, are changing at a dizzying speed the way to know the world, access the information that surrounds us and relate to the society. Archaeology can and must adapt to these new challenges and possibilities, both in the generation of knowledge and in the transmission and socialization of it. The open layout of scientific contents of all types, within the lines marked by Digital Humanities, is leading to an intense digitization of information that leads to greater visibility and internationalization. The Internet is thus, as a repository of fundamental information, but also as an active space for remixing, generating new scientific contents, also proposing new ways to explore from the academic field, such as e-learning.

In the case of smartphones and tablets, it is possible to reach a wide range of mobile possibilities via the Internet, either from a Wi-Fi or 3G/4G connection. One of the most striking advances is the Augmented Reality, that is, the superposition of virtual content directly on the real world. With the help of a next-generation mobile device equipped with GPS, compass and camera artificial information can be superimposed on sites or physical elements to enrich and interact with them. The leap into these three-dimensional environments allows us to delve into past worlds and run through streets or buildings that ceased to exist centuries ago.

Indeed, based on scientific knowledge at all times and taking advantage of the resources that technology makes available to us today, the ultimate goal of this project is to try to turn archaeology into an engine of economic growth, in a real employment field (Especially among young people), in which entrepreneurial and innovative activities take place; But without renouncing in any way the claim and the development of its important educational, formative and humanistic facet.

In that sense, the profitability or sustainable exploitation of the archaeological heritage that we propose here, based on a serious scientific investigation, of contrasted quality, with a wide projection in the educational and cultural level and with the active participation of the citizenship, is especially opportune and convenient in those areas of Spanish territory hardest hit by unemployment, such as the province of Cordova, where, in addition, tourism is one of the main economic sectors capable of generating wealth.